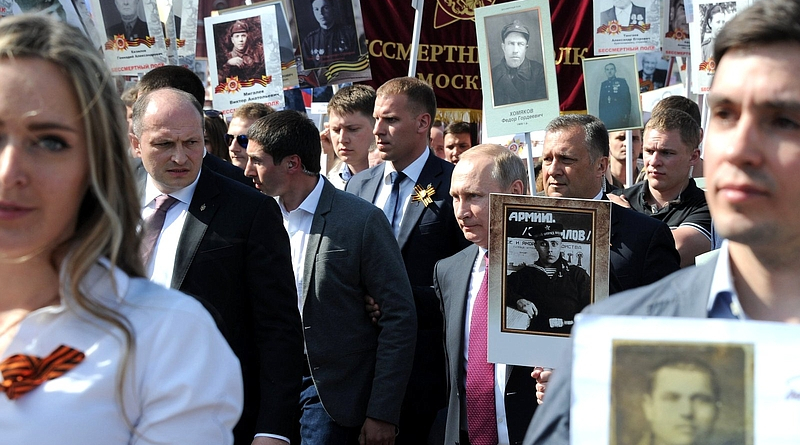 Yesterday, May 9 2018 Russia remembered the end of the Great Patriotic War which is how our North-Eastern friends refer to World War II. There’s two main parts to it in recent years: one is a military parade, while the afternoon is spent during the Immortal Regiments march. Victory Day has been commemorated ever since May 8, 1945 after signing the German Instrument of Surrender and has been a non-working day in a large part of the former Soviet Union ever since 1965. During the 90’ies, a disastrous decade for almost all of Russia’s inhabitants, the celebrations were inelaborate and unembroidered but gained traction again under the leadership of current president Putin.

Over the last few years, Victory Day has grown to be an occasion which is celebrated more throughout Russia than even New Year and, yesterday, also thanks to great weather saw more than a million Russians participate in the Immortal Regiments march in Moscow alone. One would expect that such a massive and peaceful rally commemorating the heinous and hapless hardship that was WWII would be featured on most all news channels. That the world would wed into joint whoopee joviality screaming “Nie Wieder” in unison? Yet none of this happened.

Mainstream Media hardly covered any of it, but decided to most solely focus on the military parade squarely extending its fear-mongering narrative by looking at the military arsenal on show. Business Insider, ABC News, The Guardian, Euronews, The Moscow Times, CNN, Radio Free Europe / Radio Liberty, the BBC, the Daily Mail, the Daily Star, Yahoo, Express and, likely, a few dozen more carried “military” in their headlines in another apparently concerted approach to warn their gullible Western audience into believing Russia is a menace.

Russia’s new hyper-sonic “Dagger” missile was embedded in titles, introductions and articles, as were the robot tanks, the arctic systems, the new SU-57. All were created because of an increasingly hostile West, as was explained before. But no expensive words were wasted on an immortal march of millions. The miles long stretch of commemorating mortals each carrying a portrait of a relative long lost during a brutal sacrifice seems to be too irenic and too intensely pensive for the warmongering media to mention. Putin, himself only one, carried his father’s picture.

It seems that the Western witnesses to current world affairs must be held blind to the unassailable fact that it was Russia who won that Second World War. It was them having conquered the Reichstag after loosing way over 20 million compatriots and comrades. The word-famous image by photographer Yevgeny Khaldei of soldiers raising the red USSR flag on top of the building was a staged one. In an ironic twist and given the current situation there, it’s noteworthy to recall Mr. Khaldei himself was a Jewish citizen from Donetsk.

A million march and there’s barely a mention on corporate channels who bang the war drums in ever increasing fervor. Without independent journalism the world wouldn’t know. Until when will this outrageous biasedness be continued? Is it until we’ll all be screaming “Wir haben es nicht gewusst?” all over again?